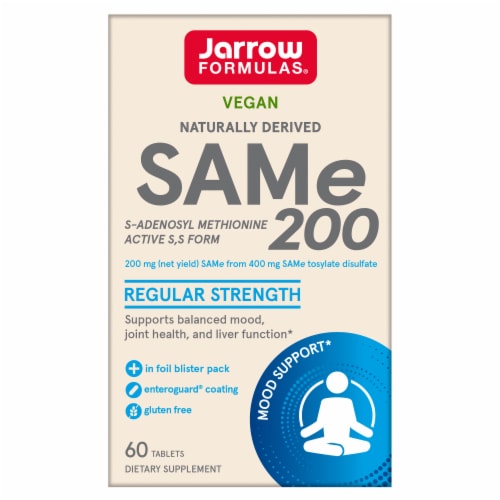 Found in all living cells, SAMe is a metabolite of methionine (an essential amino acid). SAMe is a chiral molecule consisting of two forms: (S,S) SAMe and (R,S) SAMe. The biologically active form is the (S,S) structure, while the (R,S) structure is biologically inactive. Jarrow Formulas are made naturally by microbiological fermentation and then specially processed without chemical solvents to preserve 68-80% (S,S) SAMe, the highest active level available.
SAMe supports:
Joint Health*
SAMe supports the production of healthy connective tissue through transulfuration.* In this process, critical components of connective tissue, known as glycosaminoglycans (GAGs), including glucosamine and chondroitin, are sulfated by SAMe metabolites to yield sulfated GAGs, such as glucosamine sulfate and chondroitin sulfate.*
Brain Metabolism and Mood*
SAMe methylation reactions are involved in the synthesis of phosphatidylcholine, a substantial constituent of grey matter within the brain and cellular membranes and precursor to acetylcholine, as well as neurotransmitters such as dopamine, norepinephrine, and serotonin, and has been shown to have a positive effect on mood.*
Liver Function*
SAMe metabolism supports the synthesis of glutathione (GSH), which is critical for antioxidant defenses and liver functions including phase II detoxification.