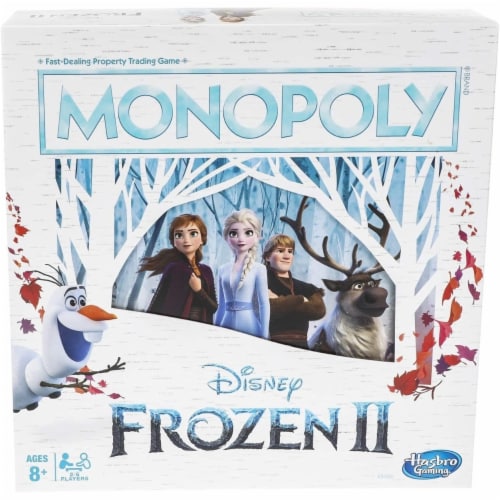 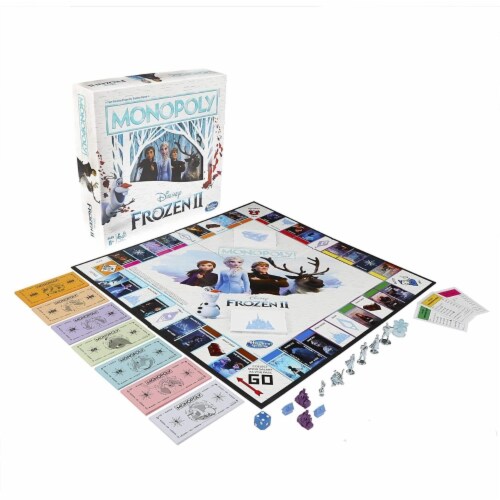 Journey through Arendelle and beyond! In this Monopoly Board Game: Disney Frozen 2 Edition, players travel around the board buying up magical locations inspired by the Disney Frozen 2 movie. The Properties are scenes from the movie, and come in color sets. If a player lands on a Snowflake space or draws a certain Chance card, they can place the Snowflake token on any property they own. Whoever lands there has to pay double rent. Activate Elsa's epic powers by sharing a favorite family memory, and use the Snowflake token to receive double rent! The last player with money when all other players have gone bankrupt wins! Copyright Disney. The Hasbro, Hasbro Gaming, Parker Brothers, and Monopoly names and logos, the distinctive design of the gameboard, the four corner squares, the Mr. Monopoly name and character, as well as each of the distinctive elements of the board and playing pieces are trademarks of Hasbro for its property trading game and game equipment.Feature: MONOPOLY GAME: DISNEY FROZEN 2 EDITION: Fans of Disney's Frozen 2 can enjoy playing this edition of the Monopoly board game that celebrates Anna and Elsa's journeys through Arendelle and beyondFeature: FEATURES AN ICY TWIST: When players land on a Snowflake space or draw a certain Chance card, they can place the Snowflake token on any scene they own. Whoever lands there pays double rentFeature: FAMILY CHEST AND ROYAL DECREE CARDS: The Monopoly game: Disney Frozen 2 Edition includes Royal Decree cards, Family Chest cards, and a Snowflake token that can change a player's luckFeature: LOCATIONS FROM DISNEY FROZEN 2: In this version of the Monopoly game kids can buy scenes inspired by the Disney Frozen 2 movieFeature: FROZEN 2 CHARACTER TOKENS: The Monopoly game: Disney Frozen 2 Edition comes with 6 character tokens: Elsa, Anna, Hans, Kristoff, Olaf, and SvenManufacturer: HasbroModel: Monopoly Disney Frozen 2 EditionMPN: E5066UPC: 630509859924